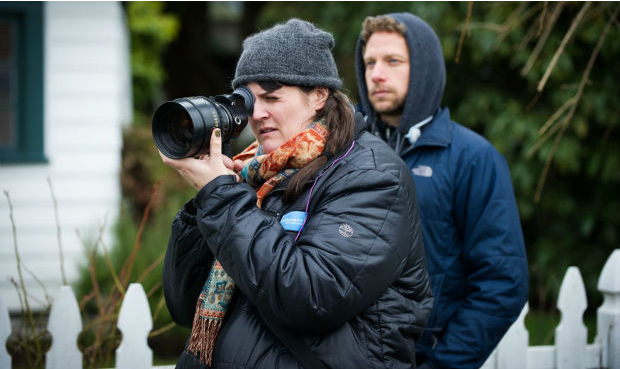 Director Megan Griffiths sets up a shot on the set of "Lucky Them" in Carnation in 2013. Griffiths warns the state faces the loss of far more production if lawmakers don't increase funding for the motion picture incentive fund. (Barbara Kinney photo)

If you head down to Portland, there's a good chance you'll run into the cast and crew of NBC's hit TV series "Grimm."

It's one of three big-budget TV shows shooting regularly in Oregon right now, which is seeing far more film and television production than we get here in Washington state these days.

A big reason is the amount of money Oregon can offer filmmakers to shoot there.

In the cutthroat film business, 29 states including Oregon and Washington offer financial incentives to land productions, according to a study by Cast & Crew Entertainment Services.

Oregon has a budget of $10 million a year for its incentive program, while Washington's Legislature has approved just $3.5 million for the incentive fund.

"We're in a position now where there's much more interest in making projects here than the money in the fund. So we're literally turning business away," said Amy Lillard, executive director of Washington Filmworks, the private nonprofit that runs the state film office and production incentive program.

"Right now I have six projects that are interested in coming to Washington and that alone would take $11.6 million in funding assistance," said Lillard.

While Lillard has lobbied for more money to lure productions to Washington, some lawmakers have targeted the program as a loophole or giveaway that should be eliminated.

She said many don't realize how much money a production can generate for the local and state economy.

"For every dollar we invest, we generate 10," said Griffiths.

"On 'Lucky Them,' we shot in Seattle, we shot in Carnation, we shot at Snoqualmie Falls, my previous film 'Eden' we shot in Ellensburg, we shot a lot near Grand Coulee Dam," said Griffiths.

All told, the program has funded over 100 projects, pouring $96 million into the state economy, $44 million in direct wages and benefits to Washington workers since it started in 2008, according to Lillard.

Unlike other incentive programs, production companies have to spend their money in Washington first before they get any money back from Filmworks. It's not just cameras, actors, and crew. Production money flows to everything from hotels to retail, catering and restaurants, rental cars and more.

That's why state Senator Jeanne Kohl Wells (D-Seattle) and a bipartisan group of lawmakers has introduced a bill that would increase the incentive program budget to $10 million over the next four years.

Lillard says the program is misunderstood. Rather than tax credits, the fund offers direct rebates to filmmakers. And she says the investment is a drop in the bucket for what we get back.

"If you look at what the return on investment is for the state, it's a 375 percent return," she said.

Funding the incentive program seems like a no-brainer. But the film industry has to constantly lobby the Legislature just keep the program alive.

"It's good business. On a feature, film companies are spending anywhere from $3-5 million in two-and-a-half months and they're spending that money with Washington businesses and Washington-based cast and crew," said Lillard.

But with just $3.5 million to work with, it's increasingly difficult for Washington to compete. The state ranks fifth-lowest when it comes to incentives among the 29 programs.

"I want to be able to stay in Seattle and keep making movies in Seattle and Washington state, but it's going to be very difficult if our incentive program can't compete," said Griffiths.

Hundreds of film industry professionals are expected to converge on Olympia Tuesday, March 17 for the industry's annual advocacy day. Plans include building a huge film set and widespread lobbying of lawmakers to raise awareness of the industry's importance to the state and seek support for increasing the production incentive fund.