25 years ago, a guy who really loved "Back to the Future" co-launched Final Draft 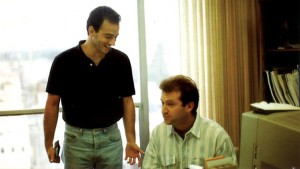 Like so many people who move to L.A. to break into the film industry, Marc Madnick can point to the exact movie that planted stars in his eyes: Back to the Future. "In 1985, I was a junior in college. I'll never forget it. I thought it was the most perfect film. It was adventurous, had a little bit of a love story. It made sense, the time travel." The day he saw Back to the Future, he knew he was destined to come to Hollywood and, if all went well, to make a movie just like it.

Madnick made it to Hollywood, but his career in show business took an unexpected turn when in 1991, he and his buddy Ben Cahan launched Final Draft®. It wasn't the first screenwriting software on the market and it's far from alone in the field today, but in Hollywood, you're about as likely to find Final Draft on someone's laptop as iTunes or solitaire; it's ubiquitous and generally accepted as the industry standard.

Still, for a quarter-century, Final Draft remained an indie business operating out of humble headquarters in Calabasas with a staff of about 40.

That changed early this month when, on the eve of its 25th anniversary, Final Draft was acquired by the payroll and production company Cast and Crew Entertainment Services.

Whether it's the end of an era or the start of a new chapter — pick your storytelling cliche — the sale and the landmark anniversary have given Madnick a chance to look back to the start.

When he arrived in Hollywood, Madnick actually did find work in the movies. Amazingly, he worked on both of the Back to the Future sequels. Unfortunately, it was as a production accountant. He says as exciting as it was to work on those films, he didn't enjoy many aspects of the job. During the filming of BttFIII, his office was the closet of a motel room, and he worked 14 hours a day, six days a week. The conditions made Madnick realize that he wanted to be his own boss. He also wanted to start doing what he'd come out West to do: write.

Screenplays have to be formatted in a very specific way for them to look professional and be taken seriously by anyone in the industry. Trying to format a screenplay manually is, in short, a gigantic pain in the ass. When Madnick and his then-roommate Cahan began co-writing scripts in the late 1980s, they found the tools were inadequate. Cahan, who is a "heck of an engineer," according to Madnick, was sure he could create something better.

"If you write it, I'll sell it," Madnick says he told Cahan. "In a much grander example, he was the Steve Wozniak to my Steve Jobs. I was business and sales and he was the engineering."

Even in the age of computers, the process of writing scripts had remained difficult. Patrick Tobin, who wrote the Jennifer Aniston vehicle Cake, recalls, "Floppy disks were, let's just say, fragile — magnets for coffee spills and cigarette ash. The worst feeling in the world was hearing the spinning disk and realizing your computer couldn't read it."

Scott Alexander (who, with Larry Karaszewski, is half of the screenwriting team known for Man on the Moon andEd Wood) was an early adopter of screenwriting software because he met the creators of a program called Scriptor at USC. In 1985, it felt as if only a dozen people in the world had it. Actually completing a script took a suite of programs: Wordstar 4, Scriptor and SmartKey.

"It was kinda cute," Alexander says of having to carry around a plastic box of floppy disks. Even with this early screenwriting tool, a writer might have to resort to Scotch tape to communicate the intended effect.

"The experience of reading a page of script should be the same as watching the movie," Alexander says of his writing style. "I always think it's interesting to put [foreign-language] dialogue in a script that you can't read." He doesn't mean subtitled; rather, he wants the audience to feel as disoriented as the character who doesn't speak the language. For instance, Alexander recalls a time he and Karaszewski wrote a character who needed to yell in Chinese. They went to a Chinese restaurant to pick up fortune cookies and took them to Charlie Chan Printing, where they played with the Chinese-language side of the fortune until it was the exact same size as the 12-point font of a screenplay.

"Each time I printed out the script I would have to get out my Chinese letters, tape them onto the script page and re-Xerox that one page," he says.

The movie, Screwed with Dave Chappelle, actually got greenlit, but Alexander could never just hit send on a rewrite because he "always had to insert this one friggin' page."

Final Draft originally was for Macs only. They would refer PC users to another company, Scriptware, and Scriptware returned the favor. In 1995 Final Draft released a product for PCs, making it the first company to offer screenwriting software for both.

Madnick says he's "a good sales and marketing person" and says that's what gave their product its edge.

Today, Scriptware's website is a hilarious relic from the late '90s, with its blinking text and clip-art, old-timey movie camera; updates for the program ceased in 2000.

For his part, Madnick has never been a tech guy. He says he almost failed an economics test in college because he thought "software" meant toilet paper, napkins and tissues — that's what they called those paper goods in his family. His teacher bumped up his grade once he realized Madnick was truly clueless. Eight years later he'd co-found his own software company.

Madnick bought out Cahan around 2003. He diplomatically says, "We're not friends and we're not not friends. We just don't run in the same circles." It was around that time that the company opened its Calabasas headquarters, which is home to a help desk where customers can speak with an actual human being.

Final Draft has about 40 employees; more than a third work in engineering, including a small group in Bangalore, India — not for cost savings, Madnick says, but because it can be difficult to find talented engineers in L.A.

Final Draft is square compared with Snapchat and the companies around Venice. Madnick jokes how they don't offer skateboards or beanbag chairs, but they offer quality of life; his employees keep a regular schedule, with time to live outside work.

Of selling his company to Cast and Crew, Madnick says, "When I was signing the papers, my hand shook a couple times, quite frankly. It's been a lot of mixed feelings, but [Cast and Crew Entertainment] is making it a lot easier. So far it's been a wonderful experience."

Everyone is still employed, including Madnick. The plan is to expand. Remaining small and independent set it apart, but Final Draft may have been nearing a critical point where it was necessary to grow to remain the industry leader. Cheaper, sleeker-looking alternatives have come on the market, although they all make sure to note their files can be converted to Final Draft.

Madnick acknowledges, "Software has gotten to the point where making it has become a lot harder." With separate apps for the Mac, Windows, phone, iPad and iPhone, "You almost spend all your dollars on engineering what you have but there's a lot of opportunity for what we could do." He feels Final Draft now has a big brother with the resources to help.

Over the years, hidden behind the scenes, Madnick has become part of the fabric of film by helping facilitate the telling of countless other stories. He hasn't gotten around to writing his own Back to the Future yet, but when he does, at least the formatting part will be a little easier.