Technology has always been at the core of industry transformations, but the pandemic has taken the want for innovation and turned it into a need. In the U.S. alone, production spend is forecast to increase from last year’s $56 billion to $91 billion by 2024. Now more than ever, we are looking for new ways to carefully adopt innovative technologies that can enable us to meet growing demands and solve key business problems.

Over the last 18 months, the pandemic forced a lot of studios to embrace modern technology as a means to adapt to the new rules of production. From workplace compliance to cloud-based tools that allow for continuous remote workflows, this shift forced companies to make huge strides in a short period of time. As was often the case, many companies had already been in the process of embracing new cloud technology, but never quite got around to it. Adam Slohn noted, "Before that March thirteenth date ... everything was frozen in time.” Upon returning to his office, Slohn

discovered a reminder he’d left for himself to investigate production cloud technology. Ryan Whan shared some insight that behind almost every high-tech science fiction movie were  antiquated practices where everything was still physically documented on paper. In a way, the pandemic finally forced the floodgates to open, helping the industry embrace the possibilities of digital production workflows.

But this quick transformation had its difficulties. According to Doug Sherman, early attempts to go virtual were often met with skepticism from artists, as they are often very tactile people who prefer working at their desk and collaborating in real-time. One of the biggest challenges was overcoming the social barrier, accounting for technological frustrations and nurturing people’s motivation to adapt. The loss of creativity was also another big concern. While many productions created new approaches to the creative process, it was nearly impossible to discount legitimate fears that a permanently remote environment would neglect the need for artistic exploration. But as we move back into office settings with new options for hybrid work, people are now enjoying the space to more efficiently collaborate in person. Some television productions started the practice of using at-home editors while also flying one out to set each week, allowing for workplace flexibility while keeping people involved.

One of the larger challenges facing this new digital era is the issue of security and compliance. 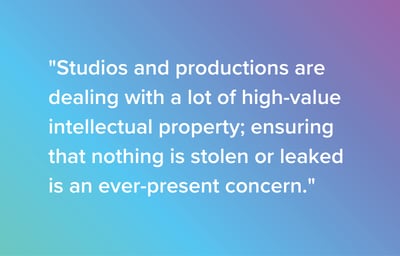 Studios and productions are dealing with a lot of high-value intellectual property; ensuring that nothing is stolen or leaked is an ever-present concern. Alex Grimwade of Disney Television Studios explained that this is something her company is very conscious of, and they try to ensure tight protection with layered defenses. Grimwade acknowledged that this may be the less exciting side of media production, but it is the essential plumbing of making an infrastructure operational. It’s not only a concern about whether artists keep sensitive content on their desktops but also whether data can remain safe while living centrally in the cloud and shared apps. Companies need to write content-protection policies that ensure everything will be saved correctly. While attacks will always be a concern, it is much easier to protect content when you have it centralized. This is equally true for personal information that a studio may store, like bank accounts and employees’ social security numbers. To maintain security, the industry must focus on continuous improvement. Each studio must test every workflow for flaws, identifying problems in order to solve them.

The pandemic also proved that productions are no longer localized and must work with a global perspective, which is a substantial change in mentality. As more individuals embrace the 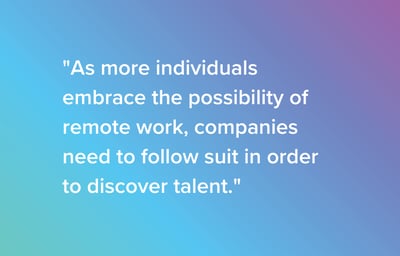 possibility of remote work, companies need to follow suit in order to discover talent. From a technical standpoint, the big challenge of making the move to cloud workflows that allow individuals to work from anywhere is that each person has unique applications and permission settings. The way forward is through file-sharing, but we need more uniformity. In the entertainment industry, many creatives work freelance and bounce around from one opportunity to the next. Having to learn new systems every time is cumbersome. The industry must adopt a collective language that allows for this movement and supports communication.

Production has been front and center for a massive technological shift, and the industry’s ability to adapt while maintaining core values only highlights its resilience. Yet this technological acceleration reminds us that we have much further to go. Advancements aren’t slowing down, so how will industry leaders fight to keep up? Watch for part two in this “Studio Perspective” series to discover the panelists’ thoughts on the future challenges and opportunities posed by technology in the entertainment industry.