As we discussed in part one of our coverage, blockchain technology is making it increasingly difficult for bad actors to change, hack, and cheat the systems to which it’s applied. Of course, there are inherently some issues. Goods and currencies in a blockchain system are secured but not insured like they might be with a bank. Once a transaction has been made, there's no way to reverse it. If you provide me with a good or service for the cost of one bitcoin, I can pay you quickly and securely. However, if I mistakenly add a zero and send you 10 bitcoins instead of one, there's no method in place for me to get it back (and since 10 bitcoins are valued at around $400,000 as of this writing, I’ll be eating ramen noodles until I retire). That currency is gone unless the good Samaritan on the other end feels like sending it back.

Looking at the numbers, Global Innovation Policy Center estimated that worldwide online piracy costs the U.S. economy around $29.2 billion per year. With blockchain, the user’s insurance is essentially their trust in the ledger. As with anything, there are inevitable issues with scams, phishing schemes, and malicious activity, but cryptocurrency and blockchain tend to show the most vulnerability with human error. High-tech as these technologies are, you still lose your money if you misplace your digital wallet (which, if you’re like me, is a real concern). But as awareness and education in this space grows, it’s likely that the security of blockchain will improve even more. Already, it’s being used in a myriad of ways, including the implementation of forensic watermarking and the facilitation of content surveillance. A system of checks and balances holds great potential to those seeking digital security. 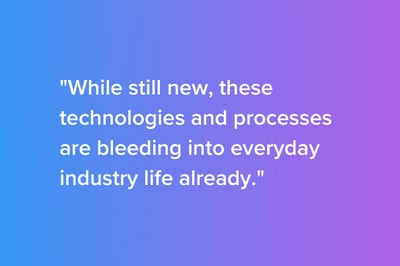 , these technologies and processes are bleeding into everyday industry life already. AMC Theaters, for one, is adopting the tools to accept crypto as a form of payment for movie tickets. In scriptwriting, software features are being developed that will show chain of custody throughout the writing process, documenting for certain who authored what (invaluable knowledge for those who write with a partner or team). This technology will be paramount for writers dealing with disputes between their talent agencies, cowriters, and/or unions. And for musicians, use-based payments offer an alternative to the standard subscription model, potentially boosting their share of earnings and giving them more control over their work. It’s easy to see why artists would want to embrace this new form of exchange. Of the $10.1 billion streaming platforms took in during 2020, artists were compensated with $193 million—a measly 1.9% of revenue. For every 1 million plays of a song, musical acts receive roughly $5,000 from Apple Music and Amazon Music, $12,000 from Google Play, $1,700 from YouTube, and $1,400 from Pandora. It’s hard to not to be frustrated by that ratio. A more equitable exchange has incalculable appeal to the working artist.

Blockchain also offers an alternative to handling intellectual property and business practices data. Smart contracts, which are programs stored on a blockchain that executes when predetermined conditions are met, are already being used. This can automate the execution of an agreement, allowing everyone involved to be immediately certain of any outcome. Most of us are familiar with the Kickstarter platform at this point (at least in passing). Functionally, a creator floats their idea to the community, saying they need a certain amount of money to make it happen. If the project is fully funded, Kickstarter takes its cut. If not, there are no consequences to the platform. Smart contracts would allow for the same process to occur without the middleman (in this instance, Kickstarter). The creator says they need a certain amount of money by a certain date. If that criterion is met, the smart contract is executed, and the contributions go directly to them. If not, all that money is refunded. There’s no ambiguity in the process. Imagine player contracts, 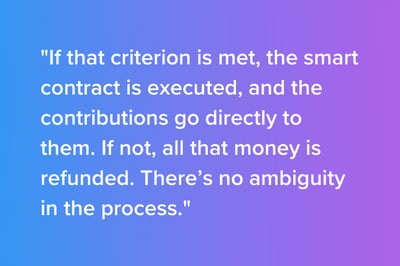 streaming rights deals, or company mergers being handled with automatically executing agreements—no deciphering complicated legal jargon and no need for an unnecessary game of “Telephone” during negotiations! Smart contracts exist on many blockchains, though they are most utilized on Ethereum (another popular blockchain), and can streamline existing esports operations, provide new revenue models, and enhance fan engagement with enhanced loyalty programs and incentives.

Media companies like Comcast are already on board, with that company’s Blockchain Insights Platform (working with NBC Universal, Disney, and Channel 4, and others) matching audience data sets without sharing data. The program helps Comcast more efficiently plan, target, execute, and measure their 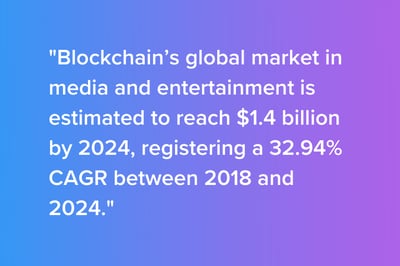 advertising. Blockchain’s global market in media and entertainment is estimated to reach $1.4 billion by 2024, registering a 32.94% CAGR between 2018 and 2024. Blockchain can provide a robust single platform to bring parties together, such as with esports, where game developers, players, sponsors, advertisers, team managers, and media are all stakeholders. In the world of film, blockchain leads to transparency in film funding, though it can also be applied on the merchandising side of things. While Sony owns the film rights to Spider-Man, for example, Disney owns the merchandising, which is why you’ll see Spidey on t-shirts and in theme parks. Blockchain allows for the easy facilitation of rights and licensing management, which is often a tangled web (pun absolutely intended) of agreements.

Blockchain is still relatively young, and the more understood it becomes, the more it will be applied to different industries. Part of the reason it can be so hard to grasp is that it is a new way of thinking that is quite counterintuitive to the way our society has traditionally handled the exchange of payment, goods, and services. This isn’t just new tech, it’s a new way of thinking. Understanding its potential requires us to rewire our brains a bit, opening to the possibilities of new venues for accounting and ownership. While still most associated with the world of finance, blockchain’s formula and technology have wide-ranging applications in almost all walks of life. Time will tell how much these elements define how and what we watch and experience, not to mention how we pay for it.

Feel like an expert? Fantastic! I guess we’ll see you on the ‘chain...

Keep an eye out for future On the Horizon installments, where we’ll discuss the rise of NFTs, or non-fungible tokens, and their connection to the blockchain phenomenon. Stay tuned...