Crypto. Blockchain. Bitcoin. As Chazz Michael Michaels once said, “No one knows what it means, but it's provocative … it gets the people going!” Not that you and I don’t get it, of course. We are incredibly confident we understand what those words mean, right?

Truth is, it seems like you can’t write a blog in 2022 without mentioning at least one of those things, even though a large majority of people still have no real understanding of the concepts behind the words. Still, with the Staples Center recently becoming the Crypto.com Arena and this year’s Super Bowl being playfully dubbed “The Crypto Bowl” thanks to a glut of related advertising, it’s safe to say that cryptocurrency has reached the mainstream.

In that year, a new gold rush began with the introduction of bitcoin. While cryptocurrency had previously been discussed and theorized, it wasn’t until bitcoin’s appearance on the public stage that we saw the theory in practice. Simply put, bitcoin is one of many decentralized (more on that later...) digital currencies, using no central bank or administrator. These currencies are the foundation of a new financial frontier, 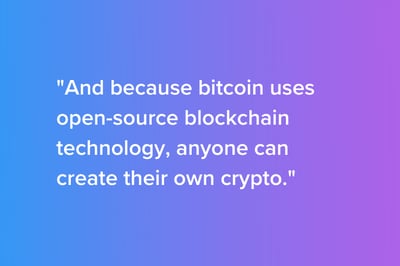 allowing for digital transactions that are considerably faster than traditional banking. And because bitcoin uses open-source blockchain technology, anyone can create their own crypto. The trick, of course, is deducing value based on outside factors like supply and demand or expected utility. Value, as it turns out, can be found in the fact that there is no central bank or authority. By removing the iron fist from the financial system’s purse strings, we unlock a host of new opportunities (as well as a fair degree of uncertainty) that can be applied to any system.

Think of blockchain as a digital ledger or accounting sheet. As the name implies, it is a chain of blocks where each one represents a previous transaction (essentially in a line item on the digital ledger). This enables every person on the network to have access to the same history of transactions, rather than one company or database holding all pertinent information. It’s a way of cutting out the middlemen. With blockchain, the ledger is not held or verified by a single entity; it is verified by the entire network. In terms of freedom, flexibility, and customization, the upside is huge. Bitcoin is built with blockchain technology, which validates all transactions and helps prevent foul play. This allows users to transfer currency, goods, or services on the bitcoin network without any sort of intermediary, making them part of an ownership group. Only the sender and intended recipient can see all the details of the transaction, while other users on the network see only that a legitimate exchange occurred. Blockchain is open-source technology, meaning you, I, and everyone we know can create their own cryptocurrency. That’s right—we could be spending Sonycoin, Netflixcoin, and Spotifycoin before long.

One of the reasons blockchain networks are so secure is the presence and persistence of miners—people who validate every transaction that occurs so that the network can approve them. Without getting into the weeds (one mind-blowing concept at a time, am I right?), a miner is a coder or developer who validates every single transaction on the network by using software to solve complex math problems. It’s like a rat race, with the first miner to solve a particular problem being rewarded with bitcoin. This incentivizes trust and legitimacy while weeding out bad actors. Once a transaction is validated (demonstrating what is known as “proof-of-work" or “proof-of-stake") and approved by the network, it becomes a new block in the blockchain. Just to illustrate how lucrative crypto-mining can be, the market was valued at $1.63 billion in 2021 and is expected to reach $2.73 billion by 2025 at a CAGR of 13.8%. The existence of this basic process is why blockchains are so secure and difficult to hack. Each block is filled with immutable cryptographic information, such as the identity of parties involved in a transaction, transaction numbers, and the unique identification of the previous block. With all this information available to the network, it becomes extremely difficult for bad actors to hack a blockchain or commit fraud. In order to manipulate or edit one block, you’d need to edit every one that came before.

To be clear, blockchain isn’t exclusively a financial concept. It’s a means to trade or track just about any good or service in a way that allows for a degree of transparency and trust not seen in traditional models. With blockchain, every single exchange and transaction is recorded and archived for posterity, removing 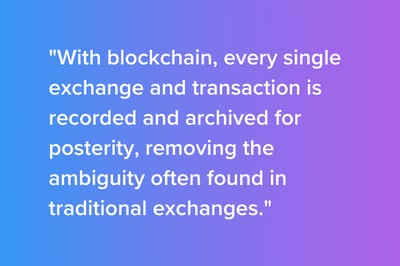 the ambiguity often found in traditional exchanges. For example: is your $1,000 bank deposit the result of a nefarious old-time train robbery? Lottery winnings? Your late Aunt Tilda? The bank doesn’t know, nor will they (normally) track where your initial deposit originated. In terms of finances, blockchain knows every move the money has made, removing ambiguity from the process. A ledger ensures full transparency by recording every change or adjustment, and this information is available for verification. A block cannot be altered retroactively without the alteration of all subsequent blocks (a feat that requires the will of the majority). In these peer-to-peer networks, users can remain anonymous, even as their approved transactions are placed at the end of a chain and made available to everyone across the network. Blockchains use cryptography—which encodes all transactions and transaction history while masking the specifics of the exchange—to stay secure. In other words, the ledger doesn’t articulate exactly which good or service was exchanged, but it knows something was exchanged and where the crypto came from. It’s sort of a back-to-basic approach, where direct marketplace trading replaces swaps through larger institutional bodies. In this way, this giant accounting system is owned by everyone involved.

As I used to say every day in AP Trigonometry: “...Huh?” If you’re still unsure of how all this blockchain business affects you in the real world, you’re not alone. Picture this scenario: Your favorite band is playing a concert downtown, so you set to work nabbing a few front row seats for you and your friends. In the traditional (centralized) purchasing model, you would use a credit or debit card to buy tickets from a vendor like Ticketmaster, StubHub, or a private seller. In this instance, your bank or financial institution provides the money, allowing you to purchase seats from the vendor. Despite the different parties adding some accountability to the purchase, they also add costs, rules, and regulations. In the decentralized world of 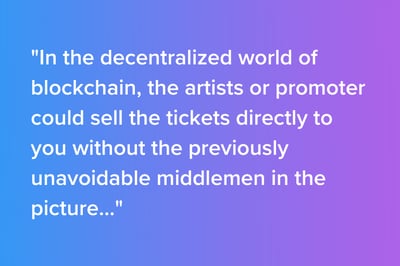 blockchain, the artists or promoter could sell the tickets directly to you without the previously unavoidable middlemen in the picture, streamlining the process, reducing fees, and helping to ensure you don’t become a victim of fraud. And because blockchain is customizable, it can allow for things like capping ticket exchanges and limiting price gouging. Popular bands can limit the number of times a ticket is resold, helping them get into the hands of true fans and not greedy scalpers. I know—it sounds like science fiction. The truth is this type of technology is already being used by artists today.

Don’t worry, we've got more crypto-enlightenment on the way in part two of our blockchain-in-entertainment coverage. Stay tuned!

Direct Deposit: The Best Way to Get All the Benefits of Going Digital