Final Draft is the entertainment industry’s leading scriptwriting software, used by 95% of film and television productions. We wanted to showcase more about the incredible work the Final Draft team is doing with their revolutionary open file format, so we sat down with Senior Vice President of Final Draft, Joe Jarvis, and asked a few questions.

Cast & Crew:  Final Draft has been very vocal about their platform’s “open file format.” Can you explain more about what that means?

Joe Jarvis: In plain terms, it means that our “.fdx” file is text-based (.xml). It can be opened and read in any text editor. You don’t need to use Final Draft to read a Final Draft file (as opposed to a closed, proprietary file format, which can only be read by the program for which it’s created).

We use .xml (which stands for extensible markup language) to describe the formatting, content, attributes, and metadata of a Final Draft screenplay. We share our specs with technology partners and those wishing to develop tools that work with Final Draft files, making the software flexible and widely accessible.

Here is what a Final Draft document looks like when it’s opened in a raw text editor: 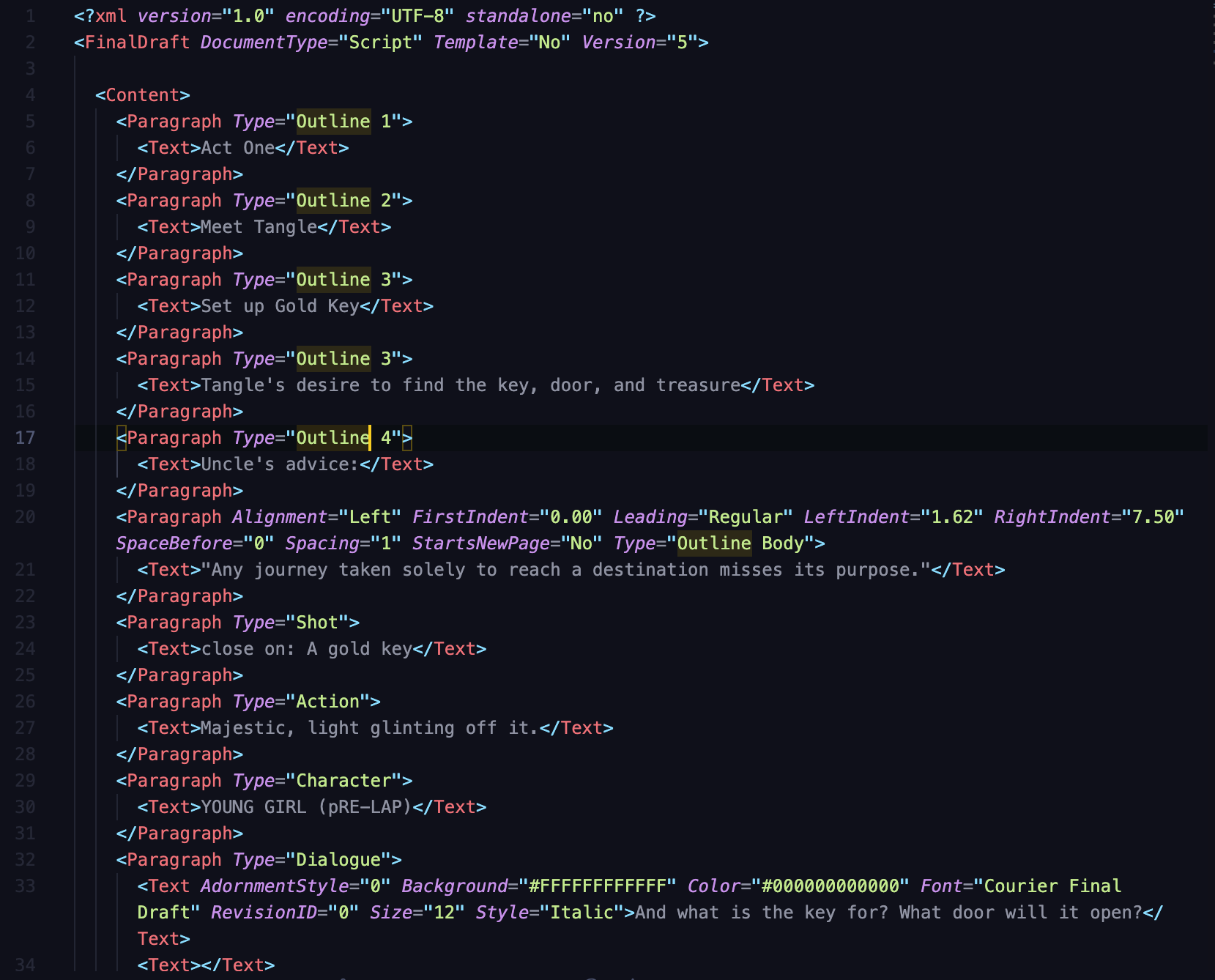 Cast & Crew:  What inspired Final Draft to take a risk and start using open file formatting? When did you introduce this functionality?

Joe:  When we started using open file formatting with the release of Final Draft 8 in 2009, the risk was that anyone could now open, read, and create an .fdx file—and many have. The move spawned several competitive products, all of which took advantage of our open file format. In fact, the main marketing messages we see from them is “Can save as Final Draft .fdx file.”

And while several new competitors entered the market, we earned many more allies. The move made it so that other products and services worked in tandem with Final Draft, using that script data and metadata for a variety of purposes. The fun thing that happened is entertainment and technology companies began reaching out with integration ideas and notions about how their software could work with ours, using the .fdx to transfer data. A classic example of this is how budgeting and scheduling software gets integrated with ours, absorbing tagged data like scene intros, locations and times, character lists, non-speaking characters, props, and costumes. It even presents new possibilities, such as an on-set sound cart that displays scripted dialogue as it’s being recorded.

Moving to the text based .fdx file meant that we were opening the garden, so to speak. It proved to be a very good move because the filetype was universally adopted. It became ubiquitous, just like .pdf’s. Everyone uses them.

Cast & Crew:  What are the benefits of one's script being saved in an open file format? How does it benefit individual writers and/or studios?

Joe:  The .fdx has a longer shelf life, is portable, and is readable outside of Final Draft.

We believe that each script represents someone’s creative idea—the intellectual property of a writer—and they should have access to it, regardless of whether they use Final Draft.

If you write a script in a program that uses a proprietary file format, you need that specific program to open your file. Should that program become defunct or go without updating in the years to come, a writer risks losing access to their work. And if a writer uses an online program to store that file as data on a server, they are beholden to the data retention policy of that company. We’ve seen online screenwriting services go out of business, and all those scripts are lost.

With the .fdx file, we’ve resolved that concern. As long as programs can still read plain text, you'll still be able to open an .fdx – even 50 years from now.

Cast & Crew:  How has the .fdx file format differentiated Final Draft in the scriptwriting software field?

Joe:  The filetype has reinforced Final Draft’s position as the go-to software in our industry. Aside from our standardization of script pagination and formatting, the .fdx has become the preferred file format for studios and production-related products/services.

Major players in our industry are working in collaboration with our development team to leverage the filetype for a multitude of purposes. Final Draft’s .fdx has been integrated into internal tools for studios like Pixar and Netflix, as well as video game publishers like EA.

We are currently in several remarkable partnerships, exploring technologies that enhance the workflows of writers, producers, and studios by using the .fdx file as a medium for data transfer. As these conversations bear fruit, everyone is seeing our vision from 2009 come alive.

Today, writers can use several other programs to read .fdx files. Going forward, we can imagine things like AI (Artificial Intelligence) services that give a writer real-time story analysis, an interface that allows showrunners to pre-visualize as they write, and tools that help an assistant director instantly develop a breakdown.

That’s why this is so exciting. Anything is possible.

Cast & Crew:  How does the open file format address the needs of the changing scriptwriting community?

Joe: The biggest changes we see coming are integrations with key technical industry partners. The .fdx was made for this purpose. With it, we can help streamline workflows, share key content and metadata for all kinds of applications, and save time. After all, time is money. Anything that can help save on the cost of production is interesting.

Cast & Crew: Cast & Crew and Final Draft have a shared mission to help create magical moments, and huge strides were made to that end with Final Draft 12. What continues to excite your team about being part of a family of companies with a common purpose at its core?

Joe:  I think it’s the potential for Final Draft to transform how data from the script is used “downstream” in the production process. That was certainly a driving force in our acquisition by Cast & Crew. We enjoy strong support from the other verticals in our company, and we’re constantly seeking new ways to integrate Final Draft with Cast & Crew’s other production services in order to offer end-to-end solutions. That’s why it’s so refreshing to work with people who share the same vision and drive. We’re all on the same path—to help our customers succeed in any way we can.

To learn more about Final Draft, visit their website: www.finaldraft.com