This is the second part of our Future of Work Blog series. You can view part one here.

The cat’s out of the bag: remote work is possible and practical in the production environment! After some understandable hesitation, the shift toward remote employee participation has accelerated. In fact, many companies in many industries are now viewing these remote and hybrid models as the preferred way forward. It’s a monumental shift, but the numbers don’t lie. According to a study conducted by Gartner back in July of 2021, 82% of all companies planned to allow employees to remain remote, which translates to roughly 45% of the U.S. workforce being fully or partially remote. Employers are seeing the benefits of this shift, including increased productivity and more diverse collaboration. A study by Upwork expects that by 2025, 36.2 million Americans will work remotely—an increase of 16.8 million from pre-pandemic research. To many, the completely on-site five-day workweek has become an antiquated and impractical notion, and the entertainment industry agrees.

Of course, there are challenges. According to Alex Grimwade, CIO, SVP of Disney Television Studios, security is always at the top of one’s mind as remote workflows become a more permanent fixture (as she discussed in last year’s Infinity Festival panel). The more the industry 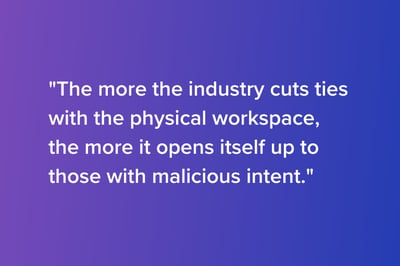 cuts ties with the physical workspace, the more it opens itself up to those with malicious intent. No major studio wants an unsecured internet connection leading to the leak of sensitive or influential information. Sadly, the easiest target for predatory activity is still the user, making security education a priority in this new age. Many companies have already adopted new training protocols and security (InfoSec) teams to help strengthen their digital walls, but as with continued education and managing larger data volumes, this can equal huge costs. Yet, the costs outweigh the risks in most cases. And the notable change in consumer behavior has cemented the need for more efficient workflows.

One huge advancement that has been making waves, thanks to shows like Disney+’s The Mandalorian, is virtual production—that is, a spectrum of computer-aided production and visualization filmmaking methods. Quite a mouthful. Simply put, virtual production is using technology to reinvent the shooting set and the way projects are shot in a host of different visualization tools. By using tools like giant LED screens and advanced game engine platforms to translate filmmaking into VR (virtual reality), virtual productions offer creators more control over the content they’re producing. 2018’s The Lion King was completely produced 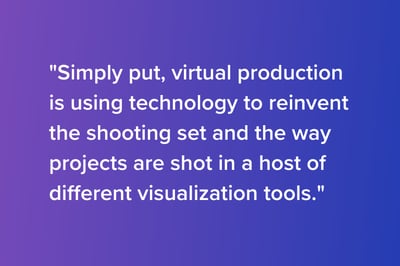 in this kind of virtual environment, allowing the filmmakers complete autonomy over the world they were creating. This allowed for time and money-saving opportunities like complete previsualization and simultaneous editing, helping the filmmakers organize their movie before they got on set to maximize time and efficiency, rather than relying on post-production magic to fix mistakes.

Bottom line: the future of remote and virtual production is a future brimming with potential. Of course, challenges like security, latency, and cost will always play a role in technological adoption, but the entertainment community is ready to handle the change. With the freedom of independent work comes new opportunities for collaboration and communication. An inevitable push for the democratization of production and personal responsibility affords many the opportunity to fight for a better work/life balance as well.

We have all faced enormous obstacles over the last few years, but adversity drives innovation. When workflows were completely disrupted during the March 2020 shutdowns, the entertainment industry adapted quickly, building and adopting new methods that are looking to reshape and improve the future of all production. While cloud workflows are not a one-size-fits-all solution to every problem facing creators, companies and studios can now explore new systems that help meet customer demands. Hybrid work models have been successful, and now the focus 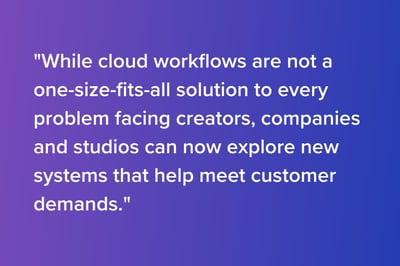 turns to making them more efficient. Entertainment has always been a bit reluctant to change time-honored traditions and operations, but as Cast & Crew CEO John Berkley predicted, 2022 looks to be a year of changing the way we categorize content. Lines and terms will blur, blend together, and so will our workflows. When new technology meets a new mindset, the sky’s the limit.

The Future of Work in Entertainment: Infrastructure and Shifting Workflows