We crave immersive content. There is something about these sorts of experiences that speak to our core pleasures and keep us clamoring for more. With its application, the metaverse promises to supercharge our storytelling in deep and unexpected ways. Creators and artists may drive evolving experiences, whether by immersing you in traditional narratives or pulling you into a more open-ended storytelling experience. There is certainly a fair bit of excitement about what metaverse technology can mean to an industry where imagination is the only limitation. In fact, we’ve already seen the release of the first movie shot in VRChat with Joe Hunting’s documentary We Met in Virtual Reality. Built on a foundation of blockchain and primed to take advantage of cryptocurrencies, the metaverse is changing how films are bought, sold, and developed. Already, independent producers have taken small steps into this world by selling NFTs and crowdfunding their films, but the big studios are following suit, building metaverse strategies to expand opportunities around popular IP. Disney recently hired Apple vet Mark Bozon to oversee the company’s push into the metaverse, a project described as having “interconnected consumer experiences across immersive new storytelling canvases.” Like Disney, many major institutions are establishing metaverse divisions to get in on the ground floor and build fierce brand loyalty. 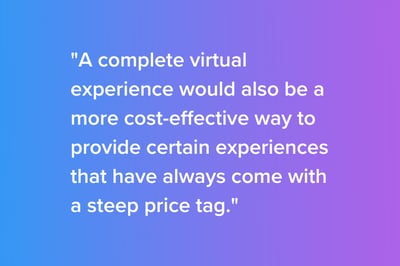 A complete virtual experience would also be a more cost-effective way to provide certain experiences that have always come with a steep price tag. For example, look at what Disney recently accomplished with the wildly popular Star Wars: Galaxy’s Edge section of their theme park in Anaheim. The new collection of attractions reportedly cost the company $1 billion to develop, construct, and implement. To date, Galaxy’s Edge is widely considered to be the pinnacle of mainstream immersive entertainment on that kind of massive scale. Consider for a moment a similarly complex experience constructed in the metaverse. For their part, Disney executives have already announced their intention to build a metaverse theme park, with CEO Bob Chapek stating, “Our efforts to date are merely a prologue to a time when we’ll be able to connect the physical and digital worlds even more closely, allowing for storytelling without boundaries in our own Disney metaverse.” This new virtual world could make the same thrills and experiences available to anyone at any location around the world without the expenses associated with travel and lodging. Of course, Disney won’t sell as many churros, but added ticket revenue might cushion the blow a bit. While customer enjoyment is certainly objective to the user, only time will tell if this is a passing fad or a continuously profitable endeavor. Will the upcoming Disney metaverse be more profitable than the company's theme parks? Will it be so successful that it takes business away from these physical spaces, rendering them redundant? Or will live interactions always have a place in our entertainment, as they provide a tangible and rewarding experience that cannot be replicated in digital environments? These are the questions on the minds of decision-makers and fans alike.

To aid the user’s adoption and to encourage increased interactivity, metaverse experiences promise to “gamify” the narratives

they present. Approaches like this are expected; they encourage engagement over passive viewership, and that builds affinity. However, traditional experiences that ask a user to take a less involved approach by simply watching or listening (think concerts, filmgoing, and the like) will also be reconceived in new and exciting ways. When it comes to this technology, the gaming world is generally at the wheel by nature of the experience itself. Microsoft recently acquired Activision Blizzard for nearly $70 billion in an effort to stave off Facebook/Meta’s dominance in the space. And though it doesn’t quite align with metaverse ideals, the company recently made a move to control the economy within the ever-popular game Minecraft by banning NFTs, claiming they do not conform with existing guidelines. In January of this year, global gaming company Entain announced its plans to invest upwards of $130 million in new and future entertainment experiences. This is a trend that can be seen across all forward-thinking institutions in this space. Jason Jones, co-founder of Bungie Studios, says, “I think, in lot of cases, what’s going to happen is people are going to throw away their TV and have a way bigger TV or they’re going to go to a totally virtual space that has a way bigger screen.” As game developers become more intertwined and involved with entertainment companies, new ways of interacting and creating become apparent, and the line between reality and the virtual world becomes blurred.

For a moment, view the metaverse as a new all-encompassing entertainment hub—one that lets you join a virtual concert or watch films and television with (and from) a new perspective. Imagine being one of 10,000 people in the “front row” of an arena show, watching from the comfort of their couch. In the metaverse, you could experience the event in an immersive environment and amongst other fans without leaving the house. This is an exciting proposition for artists who would rather do one show than five, as well as hungry fans all over the world. And in the era of Covid-19, remote involvement carries significantly fewer safety risks (not to mention the benefits to the environment, including a drastic minimization of the carbon footprint). Musician Travis Scott recently made history by selling out the Forum in Los Angeles for the first time since 1990. For that 16,000-seat stint, he earned $1.7 million dollars. In comparison, his mini “meta concert” event in the game Fortnite (where

he debuted a new song and performed for about 9 minutes) earned him upwards of $20 million, reaching millions of attendees at once (12.3 million, by some counts). In this way, artists can earn much more money while expanding their fanbases in huge ways. It’s feasible that the metaverse will provide persistent venues that function like physical ones, providing consistent hubs for artists to perform. This system is already bringing artists together from all over the world. In fact, Roblox (an online game platform and game creation system) already hosted the first-ever metaverse music awards show back in April, featuring artists like Lizzo.

It’s not hard to imagine the potential upside to sports viewership either. Using volumetric capture technology (read our blog here), these events can be recorded and broadcast in the metaverse space. Like with concerts, fans from every corner of the world will be able to connect, socialize, and watch games in virtual sports arenas. The UFC is already experimenting with this technology, and European sports are entering the fray as well. Italy’s broadcast of A.C. Milan versus Fiorentina at the San Siro stadium was the first of its kind, allowing fans all over the world experience the match from the “Series A room in The Nemesis metaverse.” Imagine sitting on the 50-yard line at every year’s Super Bowl or behind home plate for seven games of an intense World Series. “Every environment will have some form of AR, VR or mixed reality around it,” says Peter Moore, SVP and General Manager of Sports and Live Entertainment for Unity, “What we watch, how we interact, how we purchase things.” Yes, even buying things will change! Every team and athlete can expand their brand’s monetization efforts with the creation of things like in-game jerseys, boots, sneakers, and memorabilia. This practice is already in place in EA Sports’ FIFA series and Take-Two Interactive’s NBA 2K franchise. In fact, notable brands like Nike and Gucci are already creating virtual clothing and items for the metaverse. Change won’t just be felt from the stands; there are many practical ways the metaverse will affect solo and franchise players, from connecting athletes with the best trainers in the world to helping them work from the comfort of their own homes.

Still, these new frontiers beg a few very humanistic questions. Is this a connective process or an isolating one? At what point does a communal experience like a sporting event or musical concert suffer from the remote setup? As humans, we crave interaction and togetherness. Singing along to Bruce Springsteen’s “Born to Run” in your kitchen is not the same as belting it out with 80,000 fans in New Jersey’s MetLife Stadium. Where does one draw the line? And who should (and will) police metaverse spaces? After all, information privacy is already a concern, and this is bound to make it more difficult to maintain. Governments might find themselves obliged to intercede, though democratized DAOs likely have their own vision of structure and regulation. And while we've discussed at length the capabilities and possibilities of the metaverse, it's worth noting certain negatives and potential concerns that are equally (if not more) important. Privacy and identity hacking is a serious risk, as are corporate takeovers where brands set themselves up to police their “decentralized” spaces. There are also questions about a lack of accessibility for those who don’t, for example, play games or own a headset. There are also serious concerns about the negative environmental impact and the need for immense computing power. With so many of our cultural reference points from dystopian fiction, will life inevitably imitate art? Surely, this kind of space needs to be regulated in some fashion, especially considering the things we witnessed happen with platforms like Facebook. Hate speech, false information, bullying … our worst impulses tend to find a home on every platform. And by truly immersing a person in an all-consuming virtual world, the metaverse leaves them vulnerable to bad actors, magnifying and multiplying the possibility of harm exponentially. And in a world that is already glued to its cell phone, how do we deal with the potential addictive component to plugging oneself into a fantasy?

Regardless of how it positions itself in our culture, the fact is that

the metaverse is here to stay. No technological advancement has had this much potential to change the world in a seismic fashion since the internet landed in our homes. And as companies build their own unique environments, one must wonder when and how those lines will blur. Perhaps we’re closer to living in a simulation than we believe! There is certainly an element of adventurism to the endeavor; the metaverse is the unexplored frontier, and we are the pioneers. In the end, the culture will likely define whatever form the technology takes. Will it be a tool and diversion, or will we call it home?

Time, as with all things, will tell.

On the Horizon: Metaverse, Web3, and Entertainment Part One