The universe? Pssh. The universe is so last century. Welcome to 2022—we're talking about the metaverse.

So, what is the metaverse, exactly? And how do we access it? It's fair to say that the first time many people heard the term “metaverse” (lowercase “m,” as we’re referring to a concept like the internet that cannot be claimed by one individual or institution) was when Mark Zuckerberg announced Facebook’s very public name change in 2021. Now dubbed Meta, the company was shifting its focus toward the metaverse, promising to bridge the gap between gaming and everyday life. In a presentation at the company's annual Connect conference, Zuckerberg said, "Video has become the main way that we experience content … but this isn’t the end of the line. The next platform in media will be even more immersive. An embodied internet where you’re in the experience, not just looking at it.” As he explained, the potential in this environment is the feeling that you are truly there—in another place with other people, hailing from just about anywhere in the “real” world. And coming through the Covid-19 pandemic, technology that allows us to be with our friends and coworkers even when we’re a thousand miles apart is both timely and necessary.

The term and concept, however, were introduced in Neal Stephenson’s 1992 novel Snow Crash. Since then, the notion of an interactive, three-dimensional world has captured our imaginations and forced us to consider the very nature of existence. Often linked to virtual reality (VR), many have casually brushed the technology off as an enhancement for gamers, while enthusiastic futurists and science fiction aficionados tout it as a much broader evolution of society. The truth, however, likely resides somewhere in between. The term “metaverse” is more of a blanket concept, as it doesn’t refer to any one specific process or type of technology. More specifically, it represents a shift in the way our society interacts with technology itself. Some even consider it the future of the internet.

When most people say “metaverse,” they're describing a growing integrated network of 3D virtual spaces. Many futurists envision a singular space where all users coexist, though the current reality is that companies and institutions are creating their own segregated metaverses with varying purposes and attributes (such as the Minecraft metaverse, which is home to 170 million monthly average users). Using headsets, computers, controllers, and the like, people can enter these different digital universes for a multitude of purposes. For all intents and purposes, the traditional internet can be considered flat, in so much 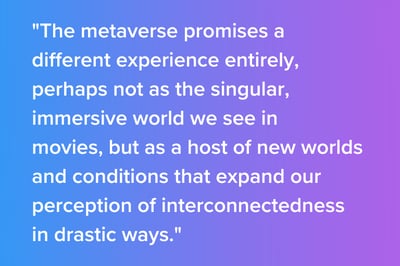 as it’s a 2-dimensional space. You look at it with your own eyes. In this way, it’s something like a limitless map or a book that never ends. The metaverse promises a different experience entirely, perhaps not as the singular, immersive world we see in movies, but as a host of new worlds and conditions that expand our perception of interconnectedness in drastic ways. You will enter it to go shopping, to attend school, to look up a recipe … just about anything you do in the real world. It could become a wholly formed, interconnected alternative to the “reality” we now occupy. But will it? One of the challenges facing developers and users is that one cannot currently travel seamlessly from one metaverse to another, as they are all owned by different companies. Time will tell whether this is the technology’s final form or if something more akin to the futurists’ open-border vision will take over.

Whether for recreation, education, or exploration, this growing network of virtual environments has the potential to upend the social order. If you’ve read Ernest Cline’s Ready Player One (or seen Steven Spielberg's film adaptation), you’ve experienced a somewhat dystopian view of how this technology could play out. Still, the story acts as a rather clear illustration (with a little dramatic flourish) of the ways in which the metaverse might impact our day-to-day lives. In Ready Player One, people all over the ravaged world escape their dreary realities by plugging into a digital realm full of wonder and possibilities. By using technology to project their own unique avatars into the constructed environment, the characters in the story effectively take on new identities in another world—one that blurs the line between what is “real” and what is not. They play games, they go to work, they socialize and form face-to-face relationships. It all may seem a bit outlandish, but this is the practical potential of this technology. 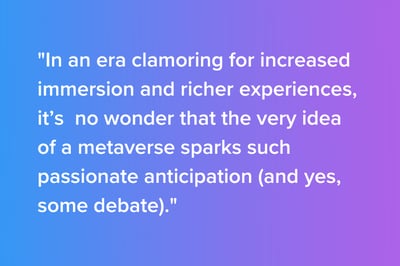 In an era clamoring for increased immersion and richer experiences, it’s no wonder that the very idea of a metaverse sparks such passionate anticipation (and yes, some debate). Since the words “meta” and “universe” were formally introduced thirty years ago, they've often been coopted and misused by those attempting to add some unearned excitement to their endeavors. Yet it wouldn’t be brandished as a buzzword if it didn’t imply some very real and very exciting practical potential. The metaverse is upon us, and we will soon feel it in many ways and to varying degrees. Some experts even believe that a large swath of the population will find themselves in the metaverse to some degree by 2030, whether that means by way of extended reality (XR), virtual reality (VR), augmented reality (AR), or some new process (for more on this, revisit our XR blog). Today, we are already dipping our toes in the pool, utilizing metaverse technology in many varying forms and ecosystems. It’s easy to point to the world of gaming when trying to visualize what a broader social environment might look like in a few years. World of Warcraft has made its bones for decades by providing an immersive 2D environment in which players can lose themselves, but it is hardly a metaverse in the most extreme sense. In relation to the concept, Warcraft is more akin to a website on the internet. A more apt example would be Second Life, the 2003 game that allowed users to create an avatar with an entirely unique personality for the platform’s virtual world.

By now, you're likely conjuring up images of wired mechanical rigs and high-tech helmets—the kind of stuff Neo would use to plug himself into The Matrix. While a bit fantastical, that’s not entirely inaccurate to today’s standards, with products like Oculus VR already providing advanced headsets for virtual environment access. Granted, not all these digital landscapes

require the use of extended reality technology. The popular game Fortnite, for example, uses its platform to host concerts, celebrations, and town halls. In fact, their Fortnite Creative platform gives users the freedom to build their own worlds and host their own events. This is a fairly radical shift for social gatherings, with users joining each other in a completely fabricated space. Of course, that’s only the tip of the digital iceberg. As XR, VR, and AR technologies advance and become more incorporated into the experience, we’re going to see a seismic shift in evolving metaverse ecosystems.

It’s not just virtual technology that’s evolving, it’s the nature of the internet itself. What began as something akin to a one-way street has become a bustling five-lane freeway. But what’s next down the road for the World Wide Web, and how will it affect the trajectory of the metaverse? Stay tuned for part two to find out...

On the Horizon: Metaverse, Web3, and Entertainment Part Three