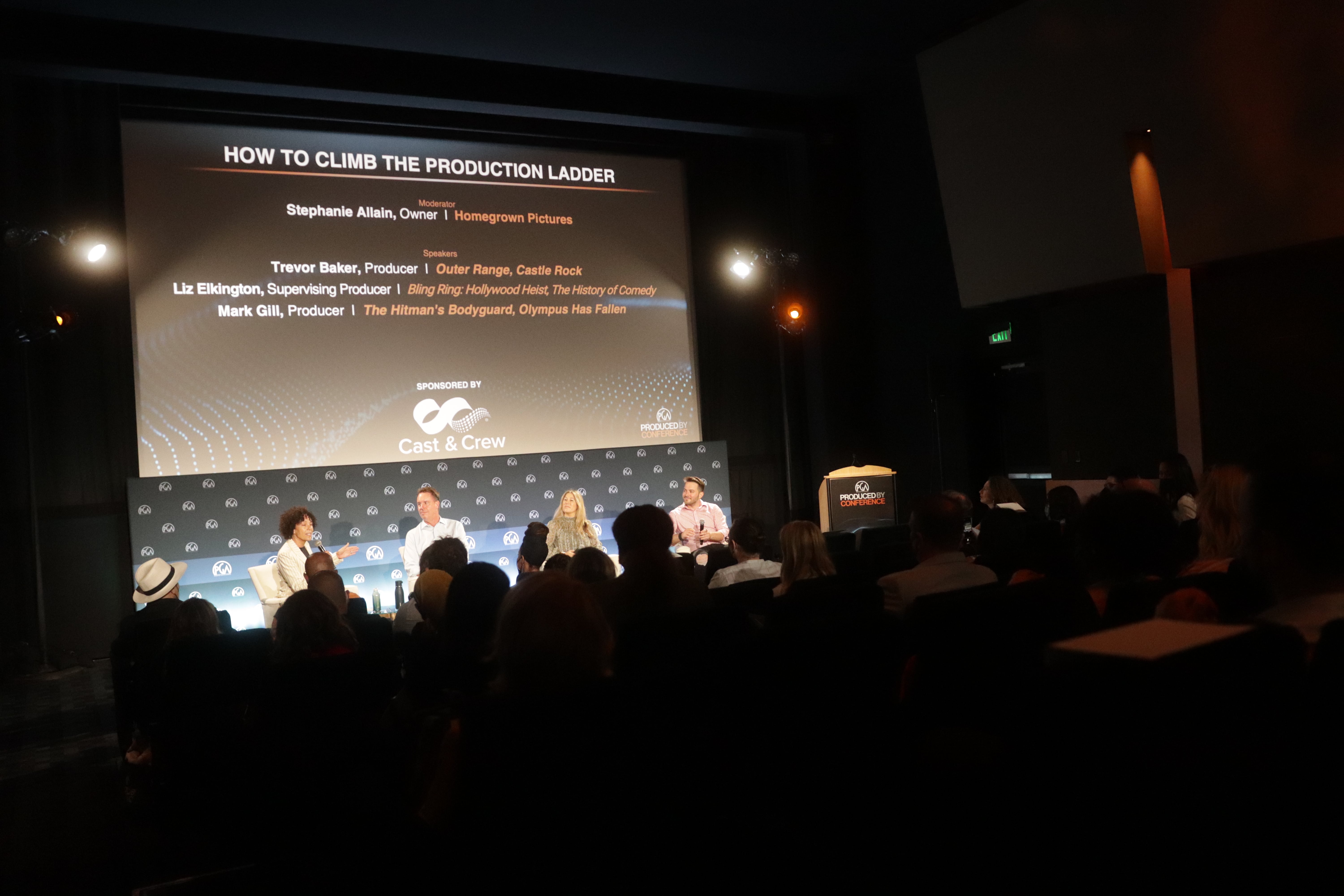 This year’s Produced By Conference (presented by the PGA) recently took place on Fox’s historic lot, calling on industry leaders and tastemakers to headline informative panels, sessions, and more. The two-day event was geared toward industry veterans and up-and-comers from around the world, each of whom brought their own unique perspective on the process of bringing content to market.

Anyone who’s worked regularly in production will attest to the importance of hearing from industry veterans who understand the challenges and opportunities present in today’s market. As part of our commitment to our peers in entertainment, Cast & Crew sponsored the event and hosted “How To Climb the Production Ladder,” a panel focused on the complicated topic of career building.

Moderated by Stephanie Allain of Homegrown Pictures (Hustle & Flow, Dear White People), the informative discussion dissected the process of establishing and advancing a career in producing. Joining Stephanie were colleagues Mark Gill (Olympus Has Fallen, The Hitman’s Bodyguard), Liz Elkington (The History of Comedy, The Bling Ring), and Trevor Baker (Outer Range, The Twilight Zone), each of whom revisited their decades of experience to provide an audience of seasoned industry pros and hopefuls with important insights into the business and the process of advancement.

On Becoming a Producer

Most producers don’t start their careers as producers. To find oneself in those particular shoes, it takes time, hard work, and a little luck. For his part, Gill got started in publicity at Columbia Pictures. Elkington was a receptionist for the BBC and Baker interned on Breaking Bad. Regardless of their start, each panelist attested to the value in those humble beginnings, as they gained skills that eventually came to use later in their careers. “Every time I found myself at a crossroads,” said Gill, “I did one thing right, [I pursued] what I really love.” He recalled how he chose to work in independent film, rather than accepting double the pay to work somewhere else. This resulted in a body of work that represents many cultural touchstones. Elkington agreed, explaining that she was led to documentary filmmaking by her passion for important, real-world stories. “That’s the key: finding something you love.”  Starting as a post-production coordinator and editor, Baker got a taste of producing while working on DVD features for Breaking Bad, where Vince Gilligan (the show’s legendary creator) assured him that the best producers have an editor’s brain for problem solving. “I was always trying to solve problems and get the best results for the show,” said Baker. “As I started building trust [and] collaborating, I was encouraged to produce.”

They all agreed that encouragement, especially from a mentor, is indispensable. “It was an incredible learning process, working with [my mentor],” assured Gill. Having someone recognize his talents helped put him in a position of agency, which was an essential starting point. Elkington’s participation in the BBC’s mentorship program jumpstarted her career and has been essential to helping her remain vital in her output as a producer. She said, “It’s important to have those mentors throughout your trajectory, no matter if you’re at the start or toward your twilight.”

Additionally, the panel acknowledged the importance of maintaining perspective and a collaborative approach when on the job. Filmmaking is a collaborative endeavor and producing a film or show demands that those in charge understand the whole picture on a macro and micro level. It is crucial that one be able to effectively communicate large ideas on a day-to-day basis. Gill firmly believes that to achieve those larger ideas, one must be able to communicate them on a smaller scale. “You have to climb the ladder of abstraction and you have to be able to communicate that in a way that people are willing listen to,” he said. Allain supported the idea and got specific, suggesting that creatives need moral support and perspective—especially when they’re close to calling it quits. “When people give up,” she said, “producers are the ones there, saying: remember why we started, why we’re doing this, why you loved this in the first place.”

On Climbing the Creative Ladder and Working Twice as Hard

It’s not uncommon for producers to work two jobs or sell their house to pursue something they believe in. These panelists were no strangers to finding multiple income streams and hiring unwanted realtors—anything to get a project in the can. In the eras of streaming and the proliferation of production, opportunity is plentiful. And yet, the same principles apply. “Three things are absolutely critical,” explained Gill. “You have to outwork everybody else, adapt to constant change, and you have to be really interested in the story you’re telling.” He noted, “You do what you have to do. I came very close to selling the house and going to work in insurance.” It was his passion for the power of storytelling that kept him coming back. Elkington added, “There’s always going to be a home for [a project] if you’re passionate about it. Tenacity is everything.” To this day, Baker is still an editor. He’s often hired on shows to edit and produce simultaneously. He credits his editing career for opening the door to opportunities as a producer. “You can prove your creative self-worth by working in other relevant jobs that get you noticed.”

Elkington, who spent decades producing while simultaneously acting as a talent booker and location manager, noted that “being multi-talented and diving into different areas of producing and [developing] a wider skill set is really critical to being successful and to continue working.” A broader skillset can inform decision-making, helping a producer to overcome technical and creative challenges. This level of experience can also boost self-confidence when it comes time to make tough decisions or guide creative visions. “It’s not a step down [to take another job]. You have to think of these jobs as part of a spectrum of jobs that are part of being a producer.”

On Instinct and Story

Elkington believes it’s important to take advice from other seasoned vets, though in the end, a producer is the one who truly knows their own project best. She said, “I think it’s [key to] trust your instinct and have the confidence to trust your instinct.” For Baker, it’s important to take advice form collaborators and have conducive conversations, but he warns against blindly following someone else’s vision. “Instinct is our worth, it’s really easy to agree with everyone in the room. It’s [about trusting] those instincts and taking the risk of saying [you] believe in something.”

Above all, the panel agrees that the story must lead every conversation. It’s the heart of every project, and every action and decision must act in its service. Being able to communicate effectively is the key to making a good project great. “Everything needs to support the emotional moments and the story,” reaffirmed Gill. “All the elements of a film need to come together and play like an orchestra, communicating the emotional essence of the story.” To that end, it is important to follow an undeniable gut instinct even when it might lead down a challenging, uncertain path. On Outer Range, Baker was once faced with a tricky choice between budget efficiency and artistic integrity when asked to save money by cutting songs that played a big part in a character’s development. Recognizing the importance of this element to the overall storytelling process, he fought the decision and argued that it was necessary to properly execute the material. He didn’t back down, insisting, “I’m not here to save you money; I’m here to make you money.” His passionate words resonated to the point where the show had its music budget increased. Story is everything, and good storytelling will inevitably lead to commercial success—which is something that will certainly advance a burgeoning career.