“Production” is a vast concept, and for that reason, the entertainment industry offers a slew of unique challenges. To make the whole enterprise worthwhile, creators must overcome these obstacles and deliver valued content. No easy task, indeed. Fortunately, the constantly evolving state of entertainment technology is rapidly improving the odds so that they are more often in a creator’s favor.

In part one of our Studio Perspectives blog series, we discussed the current state of technology in the entertainment industry with the panelists on Cast & Crew’s talk at Infinity Festival Hollywood, where they shared views and looked forward to a world with more adoption, acknowledging both the opportunities and the challenges ahead. In part two of our series, we continue the discussion.

As every panelist agreed, the last decade has seen countless overwhelming changes to production. A decade ago, many in the industry looked at technology as the solution to all inefficiencies, leading to a bunch of siloed SaaS applications that cover everything from equipment assistance to workforce management and span feature films. While these innovations may functionally solve a project’s many specific problems, they do not work together in a holistic way that best serves the production. There is a great deal of efficiency left on the table, and that means wasted time, money, and effort. Our panelists agreed that studios must standardize the 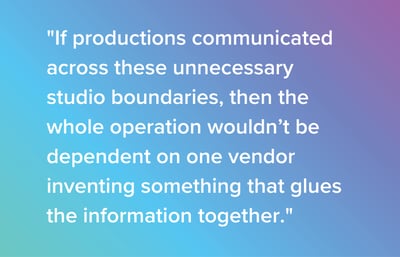 technologies they use with some version of a media hub—one with the capability to integrate these useful tools. And this issue reaches beyond the studio system; it’s an industry architecture problem that can be solved with standardized APIs. As it stands, the industry uses workflows that overlap, but each studio has radically different file systems. If productions communicated across these unnecessary studio boundaries, then the whole operation wouldn’t be dependent on one vendor inventing something that glues the information together.

As the panel saw it, there are four key roadblocks in the way of full industry adoption of the newest technological advancements. First up is the problem of latency and connectivity, which is solvable, though it will take time to improve. Internet availability is the primary determining factor in a production’s ability to create content in the new online environment. Any activity that hinders connectivity and increases latency will directly result in revenue loss. The second issue is cost, as the studio’s goal in all innovation is to seek out minimal risks that can reap big rewards. While cloud technology is a powerful tool, it can be misused, leaving big companies to ponder how they can most frugally adapt to the cloud. The third concern is agility, as the entertainment industry is notoriously volatile and can sharp, unexpected turns. It is nearly impossible to predict every issue a production will face because new ones pop up constantly. New technology needs to be able to pivot and adjust based on the needs of production. Cloud technology just might be the key to this flexible workflow. Finally, one of the panel’s biggest concerns is a general loss of momentum. The global Covid-19 pandemic forced the industry’s hand, catapulting new technologies to the

forefront and forcing the adoption of new innovations out of necessity. The new framework has held strong in most regards, but as the industry returns to some semblance of “normal,” will productions reset to their old ways? Change can be taxing, and decades of tradition are hard to upend in a short period of time. And with many of these innovations happening behind the scenes, there’s a chance that the studios decide to step back, making them miss the proverbial “boat”.

Still, the opportunities far outweigh the obstacles. There is a general enlightenment going on in the entertainment technology space. While jobs in this area might have once been considered “of a lower calling” than other more creative roles, there is a newfound excitement over the niche’s potential capacity. The pandemic helped create an ideological sea change that gives technology leaders a better seat at the table. Now, conversations around marketing cannot ignore the potential of better engagement with technology. For the first time, the studio environment is almost completely digital, providing insights from analytical tools that will help visualize time, money, and cost in a unique way. And it’s not all dollars and cents! In the creative space, new innovations like the Virtual Production stage at Disney Television Studios (a joint effort from Disney and Industrial Light & Magic) are allowing storytellers to visualize their content in exciting ways. Disney has already produced three shows on the stage, with the intent of offering it up to all productions going forward, so expect to see many more of these innovations on your screens going forward.

At the end of the discussion, each panelist was asked for one major prediction as to what the entertainment industry might look like in 2025. Adam Slohn (Strategic Advisor at Dark Fiber Production Technology and Former VP, Production Systems at Warner Bros.) believes that there is still a long road ahead in order for productions to reach their full technologic potential.  While challenges with fragmentation, rates of change, and leapfrogging between tech will still likely be present in 2025, the rapid acceleration of adoption and increased usage will result in more improvements in a shorter period of time. Ryan Whan (SVP, Head of Production Finance at HBO, HBOMAX, Turner/TNT/TBS) postulates that major studios are going to be fully digital, with clean workflows and greater efficiency, requiring less labor. For his part, Doug Sherman (VP of Technology at Dreamworks Animation) suggested that, given our momentum, an artist with equal access will be able to create from anywhere in the world. Lastly, Alex Grimwade (CIO and SVP of Disney Television Studios) predicted there to be a creative expansion in episodic television based on new technology. In her view, 2025 will see us producing things that would be shut down by 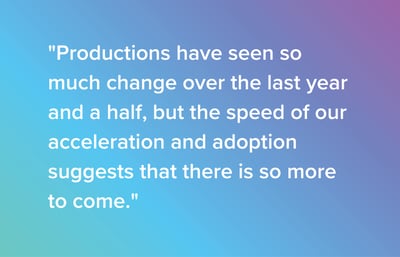 studio heads today. Productions have seen so much change over the last year and a half, but the speed of our acceleration and adoption suggests that there is so more to come. Rather than letting transformation burnout and fear of the unknown deter people in our industry, entertainment leaders are still holding their heads high, looking to the future in anticipation of the many exciting opportunities within reach.

On the Horizon: Virtual Production and Entertainment Part Two