In recent years, the video game and film industries have shared a similar trajectory, often commingling, with popular movie franchises being positioned as tentpole gaming experiences and best-selling console IP being adapted for the Big Screen. While these many projects have enjoyed varying levels of success, when a project works it ultimately speaks to the powerful relationship the two forms of media share. As Hollywood becomes oversaturated with content, giving consumers too many options from which to choose, the creators in these two mediums have an excellent opportunity to converge in order to attract new audiences and sustain the interest of existing fans.

A few years ago, the gaming industry overtook the film industry in terms of annual revenue. And during the global COVID-19 pandemic, the format has only grown in popularity. According to MarketWatch, video game industry revenue rose by 20% during 2020, reaching $180 Billion in sales—more than the sports and movie industries combined. Now, streaming heads are looking to embrace this technological trend by including gaming into their corporate strategies. For example, Netflix has invested in the creation of their own gaming division to accompany and diversify original content. In addition, they’ve seen immense success with the gamification of their own streaming content, such as Bandersnatch, a movie that allows viewers to interact with the story by selecting varying options to affect the film’s trajectory. It has been reported that this type of content increases audience attention, with 94% of all viewers actively making selections in response to the content’s prompts. And since attention is a hot commodity these days, it can be argued that these gamified film experiences are a valuable new frontier for entertainment.

From a creative standpoint, the mediums continue to overlap, as video game content becomes more cinematic with well-produced cutscenes used to guide a story. The past few decades have shown a growing maturity in gaming content that continues to speed up as new advancements attract a higher caliber of on-screen talent (like Keanu Reeves in the ill-fated Cyberpunk 2077). 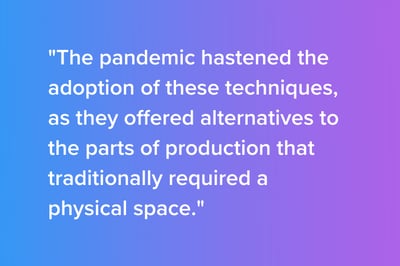 Cinema and gaming not only share thematic elements, but technological ones as well. Our last blog, The Future of Work, discussed the nature of the new virtual production environment, where entertainment studios mold their workflows around the use of technology like game engines to run productions. The pandemic hastened the adoption of these techniques, as they offered alternatives to the parts of production that traditionally required a physical space. Using game engines, film producers can now virtually scout locations and previsualize storyboards, saving time and money and simplifying on-location production.

The landmark achievement of every major gaming console to date is its advancement in graphics and sound quality. It’s an easy way for game developers to excite and inspire their audience. With the ever-present push to create high quality video graphics, the video game industry is leading the charge to minimize latency across all products. This becomes a functional necessity with systems needing constant updating and adjustment. As rendering becomes better, so does functionality. Upcoming 5G technology is leading to a lot of optimism in the industry, and new, faster network connectivity is anticipated to offer lower latency, which will enable unique experiences for gamers. In the same fashion, these technologies hold the key to better efficiencies in the film industry, namely the potential for increased scanning and scouting accuracy. Like with virtual production, as more studios adopt this technology, entertainment industry standards will change. 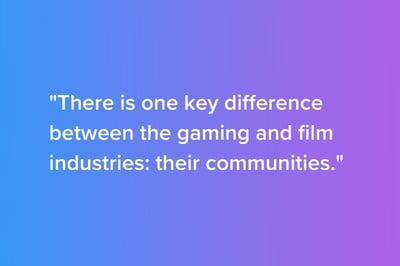 There is one key difference between the gaming and film industries: their communities. With film and television, creators are trying to reach audiences and viewers. The video game industry refers to their users. Just words? Perhaps. Yet by choosing their terminology carefully, the gaming industry has involved their audience in the experience, making consumers an integral part of the content they produce. With the deployment of live operations—or LiveOps—game-makers have established a player-centric approach to their content. They constantly concern themselves with a title's performance well after its initial release, working to improve each experience through updates. This forms a feedback loop, which has become an essential part of the community experience. Users tend to rally behind a particular video game or platform based on this experience. The ability to give direct feedback to producers also encourages users to engage with each other. In many cases, these gaming communities have branched out into other unique forms of creator content using platforms like Twitch to stream gameplay in order to build an audience. Unlike film, this can lead to an element of individual authenticity—an important differentiator—because video game culture is defined one’s own investment in the media. Some argue that this is why traditional film adaptations of gaming content tend to underperform. 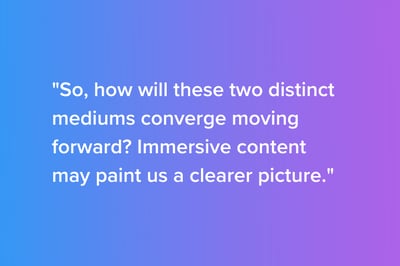 So, how will these two distinct mediums converge moving forward? Immersive content may paint us a clearer picture. At Infinity Festival 2021, Final Draft hosted an insightful panel that explored the ways in which immersive content is leading to stories that captivate audiences with extensive world-building. The current list of game-to-film adaptions in development is long, but the crossover doesn't stop there. Entertainment content is quickly becoming available across multiple platforms, presenting new ways for people to engage. And as technology advances even further, the integration of video, artificial intelligence, and data-powered personalization will become readily available. In the same way that video games spaces will thrust players into the game with detailed visual scanning. Soon, you’ll be able to see yourself inside the latest football game, wearing your favorite team’s jersey, chasing after Tom Brady. You’ll be able to view the play on the field through the eyes of unique digital characters. In the next decade, the lines between the digital realm and real world will blur even more with the continued gamification of all entertainment content. As content creators continue to grapple with how best to hold an audience’s attention, we’ll see the rise of new ideas and exciting new possibilities for media as a whole.

Production Incentives: Sorting Through the Maze