It’s the wild West out there, huh?

To say that the pipeline for creative content has changed over the last twenty years would be a fairly colossal understatement. With the dissemination of the kinds of technologies that enable just about anyone to be a filmmaker, composer, or artist (pronounced “Ar-TEEST”), changes to the status quo became inevitable. And with the advent of YouTube, Vimeo, TikTok, and social media, we managed to brew up a perfect storm for independent (and often amateur) creators to show their work to the world. You can go out today and make your magnum opus for the cost of a cell phone. What many of us didn’t expect, however, was how drastically these new pipelines would change the culture, personality, and practices of the entertainment business.

With the birth of theatrical films, television, and dynamic audio recording processes, the twentieth century was quite a revolutionary period for the entertainment industry. A boom of commercialized content brought with it new systems and structures—things like corporate talent agencies, film studios, and cineplexes. Professional artists continued to create art for (hopeful) profit, but now, their generated revenue was filtered through a litany of intermediaries. Thanks to the partial meritocracy of the so-called creator economy, today’s pipeline is starting to look a bit different, harkening back to a time when the relationship of artist and audience was a bit more direct.

Broadly defined, the creator economy is a system facilitated by software and platforms that allow users to earn revenue from the things they create. This includes businesses affiliated with the creation and hosting of online content. In this model, artists are producing, distributing, and merchandising their own content, cutting out the middlemen and staking claim over their own place in the spotlight. There are some obvious perks, of course (like the fact that the money … all the money … goes to them directly), but the creator economy’s biggest boon is the democratization of opportunity. Anyone—and I mean anyone—can earn a decent living from their little corner of the world by producing popular content. The weird. The wild. The worldly.

So, how did we get here? It would be easy to just say “the internet,” but it certainly is an implicated culprit. The fact is that at any given time in the past, there were a handful of films, records, and network television shows trying to appeal to a billion unique viewers. The streaming age has blown that standard sky high, opening the doors to an almost endless stream of options. Creators in this new economy have taken this expansion one step further, providing countless hours of varied types of content—unboxing videos, dancing exhibitions, makeup tutorials, movie reviews, song parodies, and so on—giving those same people hundreds of millions of new options. And now that everyone has a tv in their pocket (thanks, smart phones!), these pieces of content occupy the little moments when we’re walking to the train, sitting at our desks, or ignoring our teachers in the back of the classroom (stay in school, kids). And with access to their own numbers and metrics, creators are no longer held up by third-party analysis, meaning that they are free to manage their own little empire, productions, and goals however they see fit.

Content creators, those who are consistently producing worthwhile content that draws an audience, have shifted the boundaries of the business, bringing increased power to the individual within the talent 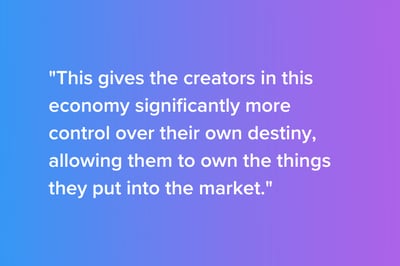 marketplace. It’s a more personal medium than audiences are traditionally used to, as creators develop longstanding relationships with those who follow them. This gives the creators in this economy significantly more control over their own destiny, allowing them to own the things they put into the market. This leads to authenticity, a trait that corporations (for all their efforts) have rarely been able to emulate. So, when celebrities double down on their popularity by cultivating a personal relationship with the public, the sky’s the limit (which is why Kim Kardashian could sell just about anything to her loyal fanbase). This has heavy implications for implicit commercial value. And that leads us to an often-dreaded word … “influencer”.

It’s not hard to see the inherent value of having the ability to affect opinion and decision-making. The fact is: that’s an influencer’s greatest asset (and the reason so many advertisers are eager to work with them). Whether because of their authority on a subject, their knowledge and position on a topic, or simply their personality and relationship with an audience, influencers reach largely specified swaths of people with the ability to affect their purchasing and decision-making en masse. Often, influencers and creators service a specific niche or audience. In fact, the last few years have shown that hyper-specific content created by passionate individuals tends to find a hyper-passionate audience somewhere online. There’s an audience for everything. Savvy creators build their online presence as a brand, often monetizing their audience through things like paid promotions, endorsements, and direct donations. As their audiences and influence grow, these creators can expand their financial opportunities, adding a healthy dose of meritocracy to a traditional corporate infrastructure. These are the new movie stars. If you doubt it, ask anyone in middle school who Khabane Lame is, and they’ll tell you. Even if you’re not on the platform, chances are that you’ve seen his hilarious facial expressions on late night TV and in the news at some point. Against all odds, these creators and influencers have bent the systems of fame, fortune, and outreach to their will. 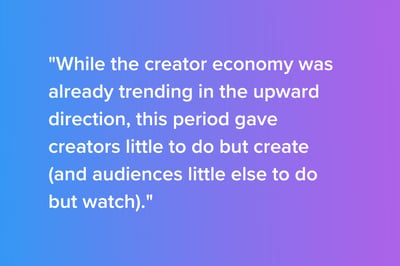 The Covid-19 pandemic certainly accelerated this phenomenon. In many ways, the lockdown era did what might have otherwise taken five to ten years. People were stuck at home, glued to their phones, and desperate for any kind of human connection they could find. At a time when we were all feeling increasingly separated, the internet provided a space for community building. While the creator economy was already trending in the upward direction, this period gave creators little to do but create (and audiences little else to do but watch). The numbers are quite staggering.

And these numbers don’t scratch the surface when it comes to the millions of musicians, podcasters,

writers, and illustrators bending the creator economy to their will. More than 50 million people worldwide currently identify as content creators. With this enormous, mobilized population activated, the market has grown to well over $104 billion. Currently, outside investors have poured a record $1.3 billion into the creator space. In 2020 alone, YouTube’s creator ecosystem contributed a whopping $20.5 billion to the U.S. GDP. That’s a lot of cat videos.

This phenomenon is not contained to one specific social media outlet, though several notable apps and sites are taking full advantage of the talent marketplace and creator economy. Established platforms like YouTube, Instagram, Twitch, Patreon, Spotify, SoundCloud, and Bandcamp are already helping musicians, writers, gamers, filmmakers, artists, and comedians connect with audiences in a sustainable way. Newer platforms like SoundOn (TikTok’s all-in-one platform for musicians) are capitalizing on this momentum by providing global audiences to receive creator work while allowing creators to maintain 100% ownership and royalties. Watching these platforms, several trends become obvious.

Creators and influencers are rarely locked into one specific platform. While they may secure their biggest following in one venue, they often parlay their successes across domains. This trend has encouraged many traditional media stars like The Rock and Selena Gomez to venture online and build out their public personas in a more direct way. This has diminished traditional dividing lines by blending the new entertainment landscape with the old. Top creators have discovered that they can even move their most ardent fans off social networks and onto their own websites, apps, and monetization tools. You can see the appeal, considering that YouTube takes 55% of ad revenue generated by creators. Numbers like this are often what motivate individuals to expand their empires by creating new revenue streams, whether that’s with physical product lines or personally curated media.

Many celebrities have tried to encourage more direct engagement with their own platforms and apps, but most have found that the best results come from some degree of coexistence. Rihanna, for example, produced her highly successful Fenty Beauty line to massive acclaim and used social media as its primary promoter. Of course, this transition doesn’t guarantee success (is it too soon to talk about Jeremy Renner’s Jeremy Renner Official app?), but it does guarantee a degree of creative control. Celebrities have always been paid to promote products and services, but now they can have almost complete say in what they will push and what they won’t (often opting to actually create their own products and brands instead). Now, 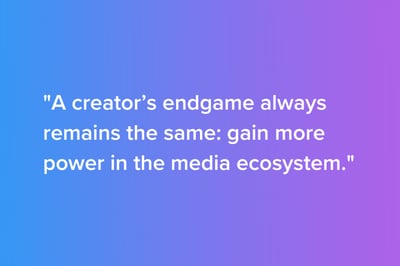 essentially everyone has the potential to build their brand popularity to the point where they can begin doing paid promotions. And while creators and influencers have shunned traditional power structures when it comes to their businesses, scaling brands often push their creators to bring on knowledgeable executive teams that manage all business opportunities. A creator’s endgame always remains the same: gain more power in the media ecosystem.

New technologies like AI, Blockchain, and XR (read about them in previous On the Horizon installments!) hold the potential to embolden talent in the creator economy by giving them even more control over their own ecosystems. For the first time, creators are owning technology rather than letting technology own them. While mainstream audiences haven’t quite discovered it yet, there is a movement toward certain decentralized social media networks that are powered by blockchain technology. When this trend catches on, the already-thriving economy will bloom. This is opening the door to many new opportunities. And many creators are taking advantage of a pipeline that feeds directly into traditional entertainment structures. Look no further than YouTube sensation (turned pop icon) Justin Bieber, who was discovered and signed based on his social media presence back in 2007. And how about Colleen Ballinger and Todrick Hall, two YouTubers who turned their internet success into Broadway notices? And the new Netflix series Hype House, a reality show that follows a group of TikTok stars as they create content and manage explosive personal lives. Online creators are winning awards left and right, including Emily Bear and Abigail Barlow’s “Best Musical Theater Album” Grammy win for The Unofficial Bridgerton Musical.

Success in this new economy isn’t just about numbers. Moreso, it’s about engagement. So, how does one get true engagement; the kind that can be an indicator of lasting success? Well, that’s a bit of an unsettled question, though the creators who push their authentic selves seem to have the largest impact. Genuine personalities are hard to recreate, and those who manage to cultivate them have begun the process of leveraging their influence in increasingly diverse ways. We’re already seeing how NFTs (non-fungible tokens) are redefining the artist’s place in commerce and culture, becoming a key part of relationship building with fans (more on that in our next article...) With ownership of this new information currency and control over their own piece of the media sphere, creators and influencers will be able to define the entertainment landscape for themselves.

What will they make of it? Will AI and algorithmic learning narrow your choices for you? And can this be sustained or will the bubble pop? These are the questions...

On the Horizon: Gaming and Entertainment